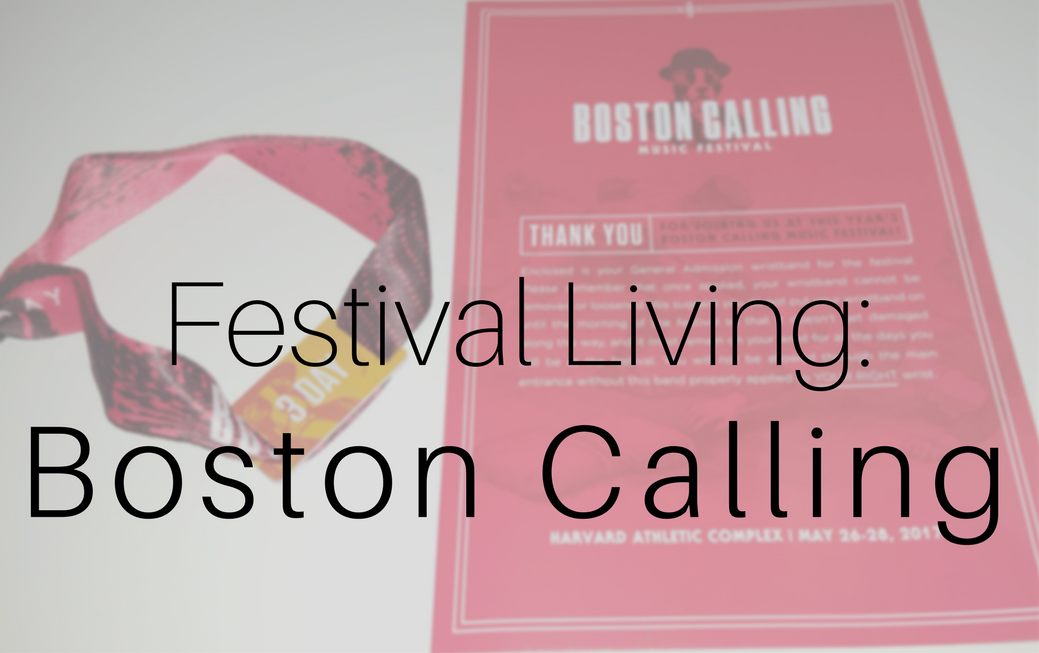 For years I wanted festivals to be my “thing”.  I thought after my Coachella experience in 2011, it would be the start of something good. Several years and several lies to myself later, I am making my next music festival move. Boston Calling.

This weekend, Boston Calling will be in full effect from May 26 – 28 at the Harvard Athletics Complex. This year’s lineup includes the likes of: Solange, Change The Rapper, Run the Jewels, Flatbush Zombies, and Major Lazer with comedic relief hosted by Hannibal Buress over the course of three days. Tickets, single day and 3-day, are still available.

This will be my first time attending Boston Calling, the second time I fully participated in a music festival. I am excited because this will be my first time seeing all of the artists live. I am unclear on just how much of the festival I will cover or how close I will get to the stage. Either way, this is going to be an experience. With rain in the forecast for Friday and plaits in tow, I have to make sure I go prepared with clips and hair ties because over-saturation is real.

Boston Calling was a good start to my partial summer in Boston. I attended the festival for all three days and was exhausted by the end. I was unsure if I was going to post the festivities. However, there was no service and I did not get to post on social media the way I wanted to. This post is to make up for that mishap. Since there was so much going on, I am going to mention the highlights of the weekend.

The price of food was to be expected. However, the food I chose was delish. My options were kept to a minimum because of dietary restrictions and wait time. Burgers are the most kosher food you can eat at a festival, so I knew I couldn’t go wrong with that. The best part of the food experience was the ice cream from FoMu. I am an ice cream addict. I was pleasantly surprised at how good it tasted, considering it is dairy-free.

Also, some of Boston Calling’s partners had booths such as Dunkin’ Donuts and Kind. Each day I made sure to hit up the Kind booth to grab a snack.

I showed up to the Harvard Athletic Complex about two hours before the set I intended to see. I ate and bee-lined my way to the Green Stage. The night before I was aware of a mild schedule change. Solange cancelled her performance for the festival and was replaced with Migos (who I really wanted to see in concert). They performed using their tour set. Their DJ, DJ Durel, started off their set getting the crowd hype, playing all the Hip-Hop/Rap songs they’ve played at every concert I’ve been to in the last eight months. About ten minutes in, Migos sans Offset hit the stage and I received a piece of my life throughout the set. A few people in my section knew more than Bad and Boujee, and I was pleased. I wanted them to perform Freak No More, but beggars cannot be choosers.

I started to wait for Chance the Rapper, even made it until an hour before his set. Life hit me and I was over it. Knowing he would be at Governor’s Ball and I would have another opportunity to see him live, I left.

During day two, I parked myself at the Delta Blue Stage. The first set I watched was Danny Brown. I never saw him in concert before, never listened to his music outside of his verse on Ab-Soul’s Terrorist Threats. He put on a really good performance and kept the crowd energetic.

Majid Jordan performed after Danny Brown. I first heard of Majid Jordan when I looked at the lineup. When I found out they were a part of OVO, I looked into their music and liked a few of their songs. Their sound is different and I like that about them. Three friends from Canada and I were the only ones in my section of the crowd who appeared to be interested in their performance. All in all it was a good show. Right after, I dipped out of the festival and went home.

The last day and the longest day for me. I  was EXHAUSTED. But I paid for three days so I was going for all three days. Also, I really wanted to see Run the Jewels and Major Lazer. For day three, I parked at the Xfinity Stage. First to go on stage was Flatbush Zombies. My first time hearing about Flatbush Zombies was on Tumblr, but I never listened to their music. I always thought based on their aesthetic they were not for me. I clearly missed out. They were so dope and I was made at myself for missing the wave. People in the crowd had me skeptical on whether their performance would be bad because of what they had heard before. However, I like their performance so much I intend to start from the beginning with their music.

Outkast put me on to Killer Mike, so it only made sense I caught Run the Jewels‘s set. It was a fun Hip-Hop set and the crowd enjoyed it with me. Of course there was a political element to the show, which everyone cheered on (whether they agreed with it or not). I would not mind seeing them perform again.

Major Lazer was incredible. It was so good I plan to see them in concert separately. It was a DJ set mixed with some of their hits. There was Pop mixed with Dancehall mixed with Raggaeton. I got the most hype during Daddy Yankee’s Gasolina (I love that song).

It was a good festival and I would not mind going again. It was crowded, but also had a relaxed feeling to it. People were not acting ridiculous like I have experienced at other shows and the food was reasonable. I have a bunch of footage from the different sets I watched. If there is an artist you would like to see, let me know and I may upload it to the YouTube channel.