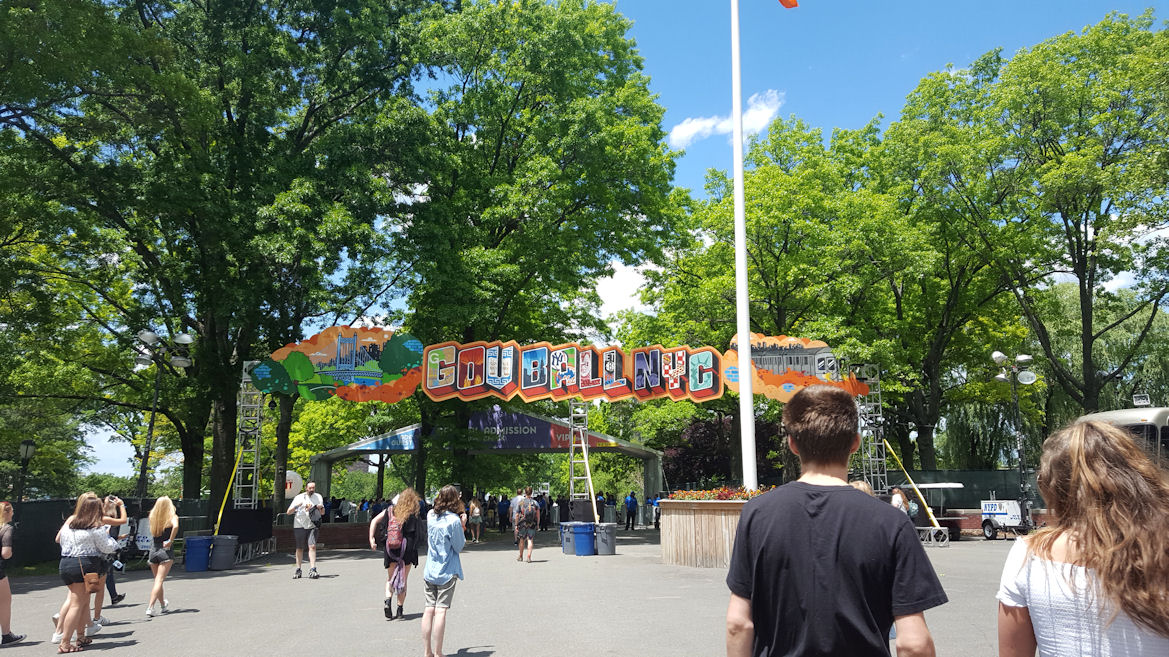 Governors Ball 2017 was definitely a situation. Thousands of people flocked to Randalls Island to see the likes of Chance the Rapper, ScHoolboy Q, Lorde, Childish Gambino, Rae Sremmurd, Tove Lo, and Tool. It was crazier than anything I have ever experienced, including other festivals and concerts. I do not know where to start with how the weekend went, so I will just give a bunch of highlights (and some low lights).

Going into this I knew the food would be: 1) overpriced and 2) no variety I liked. However, I didn’t expect how small the portions would be. It was taste testing mixed with carnival style. There was food ranging from mac & cheese to tacos and funnel cakes to tater tots. Cheeseburgers to vegan burgers and “Mexican street corn” (elotes) to cookie dough ice cream. Drinks were Coca-Cola products, beer, stackable wine, Vitamin Water (for the FREE), juice poured in scraped out fruit, and tap water to keep you hydrated. For the people over 21 who needed a vacation away from all the high schoolers who descended (or ascended) to New York City, there was a little hide away chalked full of bathrooms, benches, food trucks, and you guessed it, booze.

Over the course of two days I ate and drank the following for breakfast, lunch, and dinner (some food not pictured):

Tator Tots from Landhaus. Nuggets from The Nugget Spot. Chicken tacos from Tacombi.

Pineapple juice with blueberry and agave from John’s Juice.

Art was showcased on giant four-sided displays throughout the island. Unaware of the overall theme, the art ranged from abstract to representative of the acts featured at the festival.

Here are three of the art pieces that stuck out to me:

Now, for the main event – the music scene. One word to express the different sets: bananas! In order to set myself up to be near the front of the stage, I went to the different stages an act or two before whomever I wanted to see. In the first day I wanted to see Kehlani and ScHoolboy Q. Kehlani’s set was just as good as when I saw her in February. I flowed with her song after song, receiving my whole life to Distraction and Gangsta (just as I did back in Boston). People around me lied and said they saw Chance the Rapper backstage so I got extra ready for him to come out during The Way. It never happened (and they never saw him because he was at a different stage during the time).

Once her set was over, I handled some business and moseyed on over to the Honda stage for ScHoolboy Q. No comment on Tove Lo. Let us get straight to ScHoolboy Q’s set. Somehow I was able to get real close to the gate. It was hot as all hell and people were pushing before he stepped on stage. Highschoolers around me didn’t know ScHoolboy Q from his DJ MackWop (but kept hollering about his song Collard Greens). My frustration got more intense song by song because no one knew the songs next to me until Hands on the Wheel (but not really). I still got every piece of my life, especially when he performed Blessed (Setbacks and Habits & Contradictions helped me through a rough patch).

My day was made. Anyone else I saw was a bonus. I caught a piece of Chance the Rapper’s set, but left earlier because I wanted to beat the crowd back to Brooklyn.

Any smashing or mosh-pit effects I felt day one was magnified during day two’s shenanigans. I parked at the stage Rae Sremmurd would be performing at the set prior. Nothing could prepare me for the crushing I felt before they even hit the stage. People from all the way in the back pushed their way all the way to the front. People were getting fed up and started pushing everyone back.

Once their DJ hit the stage, it was a wrap. Whatever position you were in before, you were going to stay in for the remainder of the set. I was squished on all four sides. It was hot, sweaty, and oxygen was lacking. People were getting plucked out of the crowd left and right throughout the entire set. I went from being behind two rows of people to being smashed against the barricade. The experience was worth it once I heard “Black Beatles” and “Come Get Her.”

The remainder of my day consisted of floating around to different sets and crushing overpriced food. I watched a snippet of A$AP Ferg, then prepared myself for Wu Tang. I lost my 90s mind during Wu Tang’s set. Only thing missing was OBD, but his son did a good job while stepping in for him. Redman made an appearance to perform his verse of “Da Rockwilder.” My day was made and I did not care to see much of anything else (plus my feet were tired and through). I stayed a bit and caught a really brief glimpse of Childish Gambino’s set. I quickly decided to leave so I was not stuck getting back to Brooklyn since it was the weekend and the 4 train didn’t make my stop.

I would say Governors Ball was a success, especially since it was my first time attending. Would I ever attend Governors Ball again? As long as the lineup looks clutch, absolutely. A bonus for Governors Ball would be to have better food options as well because adults don’t care about Instagram ready food. We just want to eat.